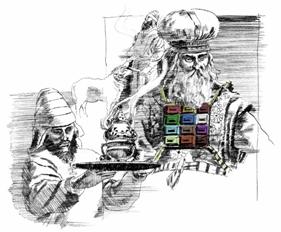 In a recent paper presented at Andrews University, an Adventist scholar declared, "One does not have to look very deep into Adventist source documents to discover that the history of Adventism has yet to be written."1 There has been a tendency to idealize our past and particularly to create legends about our pioneer period. Instead of writing accurate histories, we have tended to produce hagiographic myths.2 Of course, we are not the only ones who have done this. The followers of Luther and Wesley also magnified their virtues and strove to dissolve, explain or excuse their excesses. It often takes generations before the followers of great religious leaders dare to look objectively at their heroes.

Great men like Luther and Wesley did things that were utterly exasperating. Nevertheless, the truth does not suffer from historical honesty. Truly great men appear even greater in some respects when the myths are discarded and we see how God used imperfect human beings. As Paul said, "We have this treasure in jars of clay to show that this all-surpassing power is from God and not from us" (2 Cor. 4:7, NIV).

Although Adventist authors such as Loughborough, Spicer, Nichol, Spalding, Olson and Froom performed a great service in rehearsing our history, it should not surprise us that Herculean efforts were made at times to foster certain legends. Perhaps we are now far enough removed from the pioneers, however, to candidly review this history without feeling threatened by the truth. We also suggest that an honest look at our history will strengthen rather than weaken our faith in God's leading.

Some will look upon this venture as an unnecessary or even dangerous exercise. As one scholar has said, "The traditional picture, in most people's minds, is identified with the 'truth' and any attempt to change this will easily come across as yet another attempt of devilish ingenuity to 'demythologize' a sacred tradition."3

But understanding our roots is not merely an academic exercise. The history of a nation, a people or a church is very important. To understand Americans we must understand their history, especially their formative years. The American Revolution, the Declaration of Independence and frontier life have left an indelible mark on the collective American psyche. They explain, for instance, why most Americans insist on having private firearms and why they resent any attempt to make them wear seat belts.

The idea of a corporate psyche, corporate guilt or corporate personality is biblical. The people of Israel are often represented by the singular pronoun. They existed before God as a community, not just as individuals. Every Israelite was "baptized" into the Exodus and thus incorporated into Israel's holy history. Even if he lived a thousand years after the Exodus, a true Jew believed he had come out of Egypt and had passed through the Red Sea.

In the same way, we as Adventists have been "baptized" into a certain history. It is proper to say that we went through the events of the "midnight cry" of 1844. We suffered the Great Disappointment and the traumatic formative years of Seventh-day Adventism. We resisted and spurned the gospel in 1888. Those were the days of our religious infancy. Even though an adult has forgotten the first three years of his infancy and childhood, they are more influential in shaping his life than all the succeeding years combined. We do not need to delve far into our early history to realize the tremendous impact it has made on our Adventist psyche.

We have come to a time when we need to know the truth of our roots. Not one Adventist in a hundred has an accurate idea of his corporate religious background. Far too few of us really know how the "special truths" of Adventism were formed. We cannot understand our present struggle with the gospel unless we go back to 1844. For this we need the grace of God and much fortitude. We must dare to be as objective as possible, dare to confess the bad as well as the good and dare to discard the myths where the evidence demands that we should.

1 Aage Rendalen, "Mrs. White vs. the Facts" (Paper submitted in partial fulfillment of the course THST 618, Doctrine of Revelation and Inspiration, Andrews University Theological Seminary, February, 1979), p. 1.
2 Hagiographic refers to idealizing the sainthood of the subject to the point of distortion of reality so as to create a legend of his holiness, etc. Will Durant's comment is worth noting: "The lives of great men oft remind us that a man's character can be formed after his demise. If a ruler coddles the chroniclers about him they may lift him to posthumous sanctity; if he offends them they may broil his corpse on a spit of venom or roast him to darkest infamy in a pot of ink" (Will Durant, The Renaissance, The Story of Civilization, vol. 5 [New York: Simon & Schuster, 1953j, p. 391).
3 Rendalen, "Mrs. White vs. the Facts," p. 1.