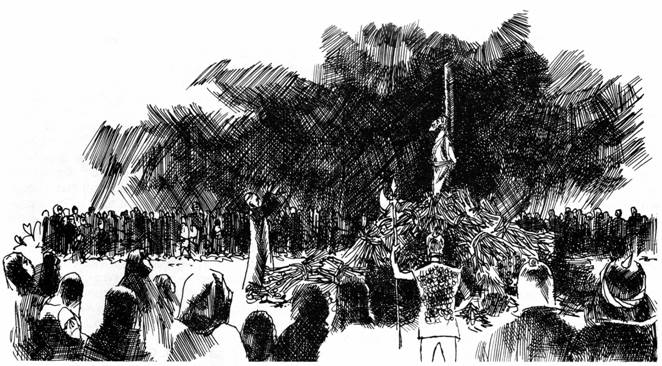 John Wesley was born on the seventeenth of June, 1703, in Epworth rectory, England, the fifteenth of nineteen children of Charles and Suzanna Wesley. The father of Wesley was a preacher, and Wesley's mother was a remarkable woman in wisdom and intelligence. She was a woman of deep piety and brought her little ones into close contact with the Bible stories, telling them from the tiles about the nursery fireplace. She also used to dress the children in their best on the days when they were to have the privilege of learning their alphabet as an introduction to the reading of the Holy Scriptures.

Young Wesley was a gay and manly youth, fond of games and particularly of dancing. At Oxford he was a leader, and during the latter part of his course there, was one of the founders of the "Holy Club," an organization of serious-minded students. His religious nature deepened through study and experience, but it was not until several years after he left the university and came under the influence of Luther's writings that he felt that he had entered into the full riches of the Gospel.

He and his brother Charles were sent by the Society for the Propagation of the Gospel to Georgia, where both of them developed their powers as preachers.

Upon their passage they fell into the company of several Moravian brethren, members of the association recently renewed by the labors of Count Zinzendorf. It was noted by John Wesley in his diary that, in a great tempest, when the English people on board lost all self-possession, these Germans impressed him by their composure and entire resignation to God. He also marked their humility under shameful treatment.

It was on his return to England that he entered into those deeper experiences and developed those marvelous powers as a popular preacher which made him a national leader. He was associated at this time also with George Whitefield, the tradition of whose marvelous eloquence has never died.

What he accomplished borders upon the incredible. Upon entering his eighty-fifth year he thanked God that he was still almost as vigorous as ever. He ascribed it, under God, to the fact that he had always slept soundly, had risen for sixty years at four o'clock in the morning, and for fifty years had preached every morning at five. Seldom in all his life did he feel any pain, care, or anxiety. He preached twice each day, and often thrice or four times. It has been estimated that he traveled every year forty-five hundred English miles, mostly upon horseback.

The successes won by Methodist preaching had to be gained through a long series of years, and amid the most bitter persecutions. In nearly every part of England it was met at the first by the mob with stonings and peltings, with attempts at wounding and slaying. Only at times was there any interference on the part of the civil power. The two Wesleys faced all these dangers with amazing courage, and with a calmness equally astonishing. What was more irritating was the heaping up of slander and abuse by the writers of the day. These books are now all forgotten.

Wesley had been in his youth a high churchman and was always deeply devoted to the Established Communion. When he found it necessary to ordain preachers, the separation of his followers from the established body became inevitable. The name "Methodist" soon attached to them, because of the particular organizing power of their leader and the ingenious methods that he applied.

The Wesley fellowship, which after his death grew into the great Methodist Church, was characterized by an almost military perfection of organizaton.

The entire management of his ever-growing denomination rested upon Wesley himself. The annual conference, established in 1744, acquired a governing power only after the death of Wesley. Charles Wesley rendered the society a service incalculably great by his hymns. They introduced a new era in the hymnology of the English Church. John Wesley apportioned his days to his work in leading the Church, to studying (for he was an incessant reader), to traveling, and to preaching.

Wesley was untiring in his efforts to disseminate useful knowledge throughout his denomination. He planned for the mental culture of his traveling preachers and local exhorters, and for schools of instruction for the future teachers of the Church. He himself prepared books for popular use upon universal history, church history, and natural history. In this Wesley was an apostle of the modern union of mental culture with Christian living. He published also the best matured of his sermons and various theological works. These, both by their depth and their penetration of thought, and by their purity and precision of style, excite our admiration.

John Wesley was of but ordinary stature, and yet of noble presence. His features were very handsome even in old age. He had an open brow, an eagle nose, a clear eye, and a fresh complexion. His manners were fine, and in choice company with Christian people he enjoyed relaxation. Persistent, laborious love for men's souls, steadfastness, and tranquillity of spirit were his most prominent traits of character. Even in doctrinal controversies he exhibited the greatest calmness. He was kind and very liberal. His industry has been named already. In the last fifty-two years of his life, it is estimated that he preached more than forty thousand sermons.

Wesley brought sinners to repentance throughout three kingdoms and over two hemispheres. He was the bishop of such a diocese as neither the Eastern nor the Western Church ever witnessed before. What is there in the circle of Christian effort--foreign missions, home missions, Christian tracts and literature, field preaching, circuit preaching, Bible readings, or aught else--which was not attempted by John Wesley, which was not grasped by his mighty mind through the aid of his Divine Leader?

To him it was granted to arouse the English Church, when it had lost sight of Christ the Redeemer to a renewed Christian life. By preaching the justifying and renewing of the soul through belief upon Christ, he lifted many thousands of the humbler classes of the English people from their exceeding ignorance and evil habits, and made them earnest, faithful Christians. His untiring effort made itself felt not in England alone, but in America and in continental Europe. Not only the germs of almost all the existing zeal in England on behalf of Christian truth and life are due to Methodism, but the activity stirred up in other portions of Protestant Europe we must trace indirectly, at least, to Wesley.

He died in 1791 after a long life of tireless labor and unselfish service. His fervent spirit and hearty brotherhood still survives in the body that cherishes his name.